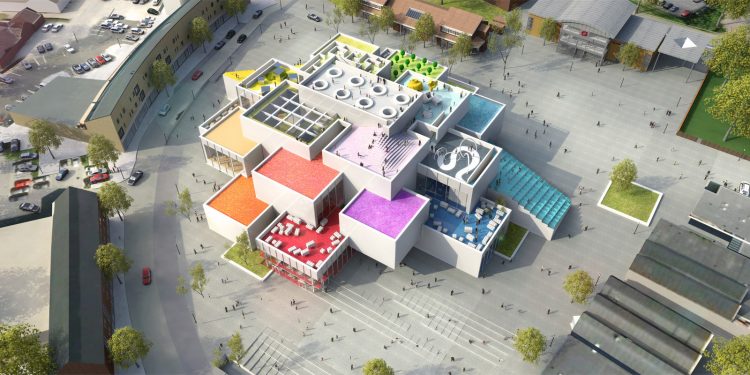 The Billund, Denmark, soon to be opened LEGO visitor center by BIG will surely be a really interesting structure that should be seen by architecture enthusiasts because of the quite unique LEGO theme chosen. With the official opening date coming in September, LEGO released drone footage over it in order to show the LEGO-style prick that covers it and the stacked formation.

The LEGO House is basically made out of 21 white blocks that are stacked similarly to the LEGO building blocks.

In the drone footage you can see below, you can see the current state of the building, with the circular skylights going through the huge LEGO block creating the holes that we expect when looking at a LEGO structure.

BIG initially unveiled the plans for the LEGO house in 2013 and through the aerial view we can see that everything is going according to what was planned, a building that when looked from above looks like a LEGO structure.

In the larger volumes added there are also terraces and building walls are noticed as being white clay tiles in clad. Bright hues similar to the colors in the toy blocks were used and the playgrounds in the terraces feature toy furnishings in a LEGO style, including chairs, tables, a rocket and helicopter.

LEGO was invented in the town of Billund so the new LEGO House is homage for the 1932 invention that is incredibly popular even today. The building is going to feature 3 restaurants and various exhibition spaces. There is even a special restaurant where robots are going to bring you what you order.

After September 28 you do want to check out the LEGO House as it will surely be something special. Now let us watch the drone footage:

You Can Now Own A Haunted Scottish ...