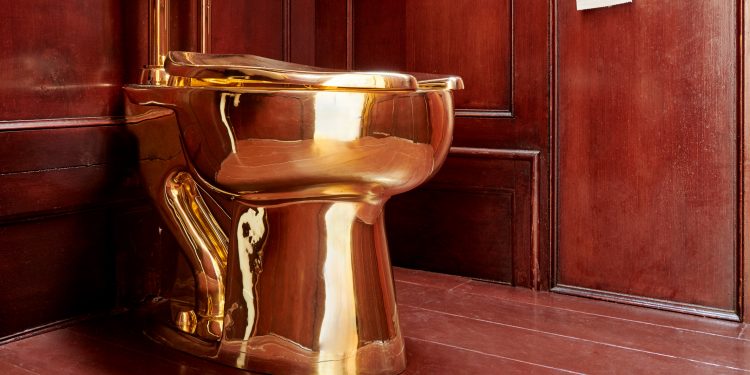 A solid gold toilet created by Italian artist Maurizio Cattelan was stolen from a Blenheim Palace exhibition. According to reports, the artwork is worth 5 to 6 million dollars. It was a part of Cattelan’s solo exhibition Victory is Not an Option, an exhibition that was scheduled to run until October 27, 2019.

What is particularly interesting with the gold toilet is that it was fully functioning. Exhibition visitors could actually book 3-minute slots so they could use it.

Dominic Hare, Blenheim Palace CEO, declared that the toilet was stolen in a really fast attack. Even so, there is speculation that the theft is actually just a hoax so that the work can be destroyed. Some believe this is just a plot, similar to that of the destroyed Girl With Balloon by Bansky.

“At first, when they woke me up this morning with the news, I thought it was a prank: Who’s so stupid to steal a toilet? I had forgotten for a second that it was made out of gold. I wish it was a prank. [The incident] is deadly serious if even a little bit surreal since the subject of the robbery was a toilet.”

Ever since the raid happened, the solid gold toilet was not found. Investigators fear that it could have been melted. The police did say that a man, 66 years old, was arrested as it is believed he is connected to the theft.

The golden toilet, entitled “The American Dream”, was previously installed in September 2016 at the Guggenheim Museum in New York. At that point in time, it was used by over 100,000 people. The chief curator of Guggenheim actually offered it to President Donald Trump last year.

Police inspector Jess Milne said that because of the fact that the toilet was plumbed right into Blenheim Palace’s water closet, significant flooding and damage happened to the birthplace of Winston Churchill.

Last but not least, the artist declared in an email that was sent to the New York Times:

“America was the one per cent for the 99 per cent, and I hope it still is. I want to be positive and think the robbery is a kind of Robin Hood-inspired action.

Rent A Mars Designed Dwelling That Is ...

Cortex Shelter – Refugee Shelters That Can ...