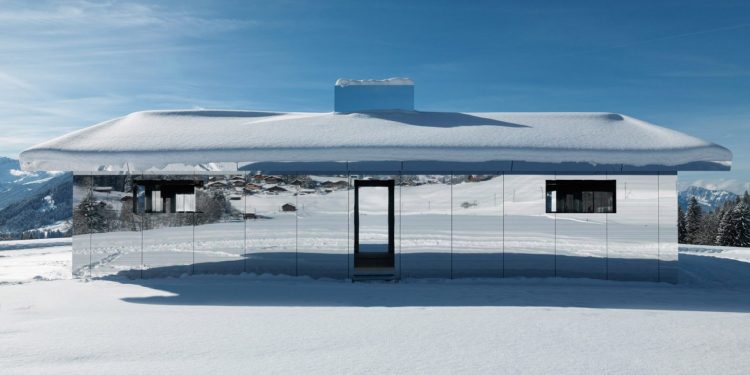 The Mirage structure has this name as it is completely clad in mirrors. It thus reflects the landscape and simply disappears into it. The current plan is to leave the structure in the Swiss Alps for a period of 2 years. This instantly makes it a tourist destination for those interested in architecture, design and unique places around the world.

“Right now it’s completely minimal, removed of all color and definition. It’s a whiteout, covered in a blanket of snow right now. The viewer can come back to the piece as the seasons are changing, in fall in a storm or in the summer when it’s a green pasture. As our lives change the artwork is shifting with us.”

The Mirrored Mirage House is open to the public. Anyone that so desires can freely explore everything. This does include the interior, which is also fully-mirrored.

Mirage was previously installed in Palm Springs in a desert setting in 2017. Then, it was actually put inside a Detroit former state bank. Every single time the house was erected, slight optical adjustments were made through mirror angles in order to get a perfect visual effect.

When referring to the design of the house, Aitken said that the style is very familiar, a typical suburban house in the twentieth century. For the Swiss Apps installation, the artist wanted to embrace the surrounding as much as possible. The only real difference is that the shape was a little modified so that the home can withstand the heavy snow in the area.

What is interesting is that houses in the area are usually built during summer. Aitken actually brought the house to the location during 3 winter months. The process was done in pieces.

In Detroit there were artificial lights that were utilized in order to dictate how visitors see everything. In Gstaad, there is a relying on changing weather and natural light to get the needed illumination.

“The work really is the sum of the landscape around it. When you think of art you often think of something much more solid, but Mirage moves in an autonomous way. It changes in an almost chameleon-like form.”

What do you think of this beautiful structure? It is definitely much more interesting than you could imagine, a true chameleon that changes itself when the weather and lights change. Would you live in this house? It would surely be an interesting experience.