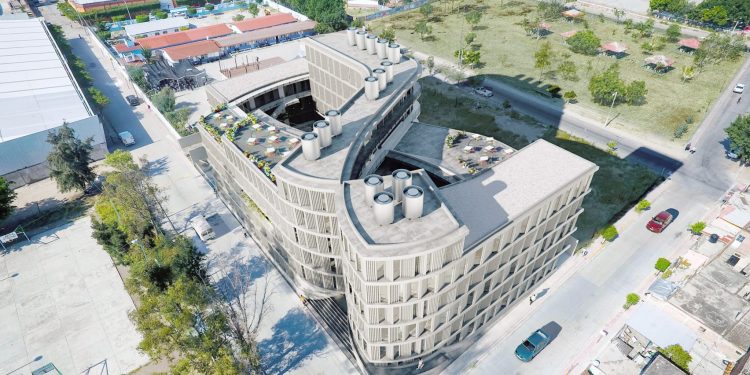 SO-IL, a highly reputable architecture firm in New York, recently envisioned a stunning concrete apartment building to be erected in Leon, Mexico. The building is meant to deal with the shortage present for low-cost housing in the country.

The name of the project is Las Americas and tries to offer much more than just affordable housing solutions. It also promotes infilling the urban sites instead of just building something new at the outskirts of a city.

The Mexican government has been focusing on building suburbs that have cookie-cutter, affordable houses. The problem is that these are developments that ended up being slums. A representative of SO-IL declared:

“The city (Leon) is at a critical point in its growth to establish a new solution to the nation’s housing crisis. How can we transform Mexican urbanization from suburban banality to dense, thriving communities in the heart of cities?”

In a collaboration with the Instituto Municipal de Vivienda de Leon (IMUVI for short), SO-IL created the prototype scheme through which the affordable homes are actually stacked right atop of each other. This was defined as being “intra-urban vertical housing”. The official schedule marks construction starting exactly this year.

The building in the images on this page is 5,800 square meters and includes 6 levels with 56 apartments in total. These are units that will be connected and will have 1, 2 or 3 bedrooms.

SO-IL did work with different Mexican fabricators in order to create special concrete breaks that are very easy to install and cheap. Different façade patterns are thus possible. According to the studio:

“The concrete unit reduces the construction time and cost and elevates the design potential of each individual home. The result is an irregular, playful façade reflecting the individual units in a unique, non-repeating pattern.”

The building is designed to form a figure 8, including sculpted bars that are wrapped around 2 interior courtyards. The units include a large landscaped courtyard.

There are no units that are facing each other. This offers a clear sense of ownership and privacy. In outdoor spaces you can interact with neighbors.

Inside the apartments, layouts are designed so that they can support multi-generation living. Also, natural cross-ventilation eliminates the necessity to add mechanical cooling.

According to the studio:

“The project uses limited resources to create a new urban living paradigm. It serves as a prototype for municipalities to pursue a similar approach and as a catalyst for urban regeneration and improvement of quality of life for low-income communities.”

It is important to implement such projects in numerous communities from all around the world, where affordable housing is necessary.

Factors That Devalue Your House