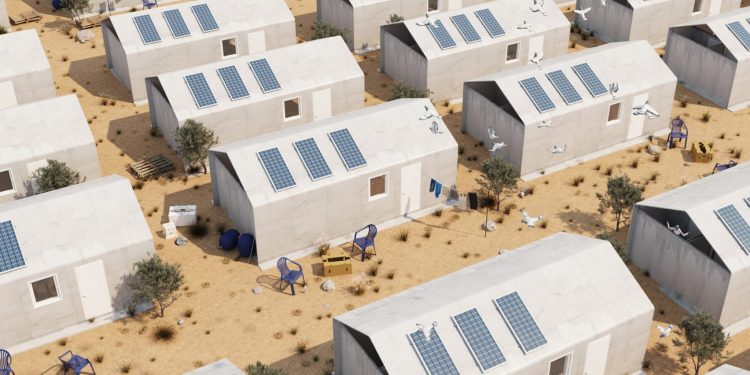 Cutwork utilizes Cortex Composites for the shelter concept. This is a flatpack concrete sheeting type that you roll into place. Then, it is set into the permanent form by simply adding as much water as is needed.

Concrete shells harden in just 24 hours. Then, they can actually resist for thirty years with just minimal maintenance needed. This means that this is a great option that is now available, one that is much better than the tent cities we all see refugees live in. The solution might also be suitable for poor regions.

This shelter was designed by Cutwork in order to show the world how Cortex Composites can improve conditions for the millions of refugees that are now recognized by the UN.

“Our mission is to create stability and security for people who have lost the most – essential safety, a place to call home, and the simple foundations to rebuild communities and hope.”

The Cortex Shelter is particularly interesting since it does not require the use of skilled labor. It is really easy to build a shelter. The process just takes one day and the work of 2 people.

A shelter is built by adding metallic tubes in the right position. This creates the frame. Then, the concrete textile is rolled on and then hydrated.

When water is added, the fabric (water-soluble) that holds the concrete textile disintegrates. This forms a concrete structure that is then reinforced with the use of a 3D matting framework.

According to Cortex Composite, the material is 2 times stronger than regular concrete. This is impressive since the shelter has a thickness of just 1.25 centimeters. It is much less carbon intensive than regular cast concrete shell.

Insulation panels are added in the interior. They are very easy to be washed and regulate internal temperature. This makes shelters very comfortable, definitely much more than tents.

Cutwork decided to add a high window in order to add air and light while also offering privacy. You have enough space for a bathroom and a kitchen so communal toilet areas and kitchens are automatically removed.

If desired, builders can also add solar panels. This generates power to be used to charge phones and, of course, lights.

According to Cutwork, the shelters can easily allow refugee camps to become a home as opposed to a survival area. This technology can also be utilized to build permanent shops and schools, among many others.

Raj Villa In An Unexpected Location – ...