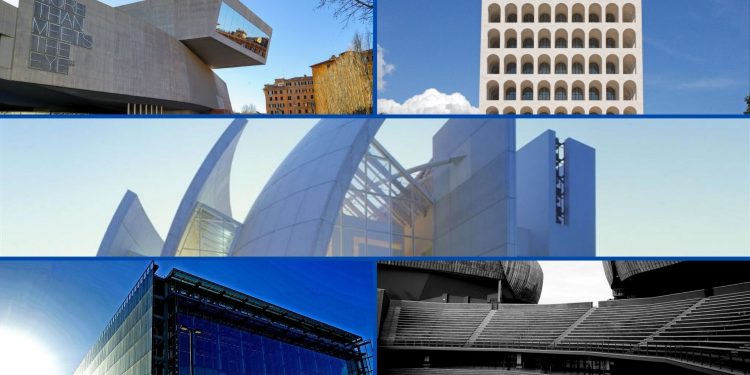 It is impossible not to think about the Roman Empire and the incredible buildings of those years past when mentioning Rome. The ancient glory of the city is filled with Emperors and popes. As a result, you might think that Rome looks old. Beautiful but old. You couldn’t be more incorrect.

Tourists want to see the Colosseum but if you are interested in architecture, make sure that you make some time to check out these contemporary architecture masterpieces.

You most likely already figured out what this is since MAXXI is an acronym that is used to describe the “art museum of the 21st century”. It was designed by the talented Zaha Hadid and was inaugurated in the year 2012.

You can check out the museum in the beautiful Flaminio district. It host many exhibits by world-renowned artists but you will initially be stunned by the contemporary architecture gem.

The MAXXI is actually divided into 2:

This stunning building features a dynamic and winding design, with beautiful use of glass. Exhibition space was re-thought and it influences how curators and artists are presenting artwork.

Also known as “Palazzo della Civilta del Lavoro”, “Palazzo della Civilta Italiana”, and “Colosseo Quadrato (meaning Square Colosseum)”, this building is a symbol of EUR, which is a Rome district described as futuristic. It is one of the clear icons of the architecture of the twentieth century and appeared because Benito Mussolini was interested in building it as an image of the Colosseum.

The Italian Civilization Pallace was inaugurated in 1940 and was not well received by the locals at that time. The city does have classical planning and the large structure did interfere. However, this was in the past and now we are faced with a beautiful minimalist style modern charm.

Fun Fact: The Italian Civilization Pallace is now own by Fendi, the fashion house.

Also known as The Church of God the Merciful Father, you simply cannot miss the structure as it has the shape of a ship. Its sails create a beautiful view point in Rome. This church is located in the Tor Tre Teste working class district, was inaugurated in the year 2003 and was designed by Richard Meier.

The Jubilee Church is practically a symbolic interpretation of the soul that points towards the Lighthouse of Christ, thus the ship structure, and symbolizes a church that is ferrying faithful people towards the third millennium. Leaving aside all this fancy talk, it is a contemporary architecture landmark you do not want to miss.

Close to the Olympic Village, in the Parioli district, The Auditorium Parco Della Musica was the work of renowned architect Renzo Piano. The building was inaugurated in the year 2002 and is right now the largest European space dedicated to music. As expected, acoustics are exceptional and there are actually 3 hangar buildings that create the structure. These buildings overlook “The Music City Piazza”, which is a beautiful open-air amphitheater.

The auditorium features ultra-modern design that is combined with traditional materials like Roman brickwork and travertine marble. Internationally acclaimed artists are often featured so you may want to give it a try for a beautiful performance.

You can visit this in the EUR district and it hosts several exhibitions, conferences, shows, and art galleries.

What is very interesting is that the Rome Convention Center is powered by the use of eco-sustainable energy. It also featured technologically advanced materials during construction. This is a building that challenges contemporary times, vulnerability, and instability.

Solar Panels Made Out Of Plant Waste? ...